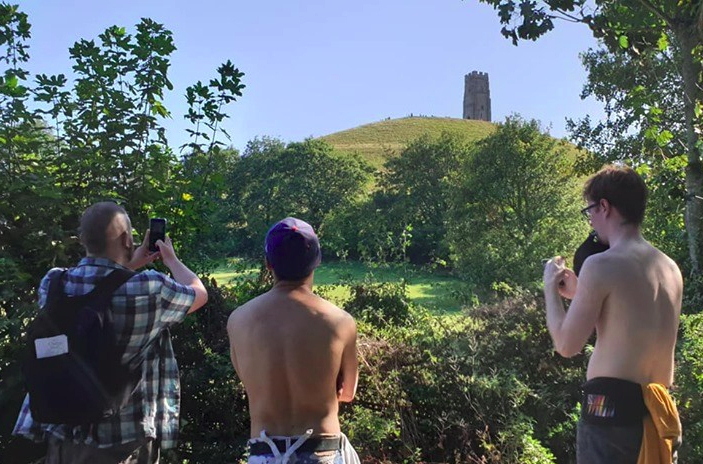 Glastonbury is one of those places. There is something in the geography of the place that makes in naturally sacred. Myths, legends, conspiracy theories and mysteries cling to it like a magnet to steel. Special significance was given to the location far back in history, when most of the surrounding land was flooded and the Tor and surrounding raised land was a group of islands known as Avalon. This may ring a bell if anyone’s read Arthurian legend as the Mystical place Arthur went when fatally wounded.

The two focuses of much of the Sacred lore around Galstonbury is the Tor, a huge stepped hill, and the red and white Springs, natural springs at the base of the Tor

At various times the Tor has been known as an entrance to the Celtic fae otherworld, the world of the dead (although Celtic lore often implies those may or may not be the same place), the home of the welsh deity and king of the fairies Gwen App Nudd, the resting place of sleeping dragons, a neolithic labyrinth, the hiding place of the Holly Grail and the Final resting place of king Arthur. Typically thought by a lot of pagans the Tor is seen as a centre of male orientated Sacred energy.

The Red spring, also named the chalice Well is an iron rich spring of red tinged water that has been in constant use for over 2000 years, with archaeological evidence going as far back as the late palaeolithic era. A common site of pilgrimage to take in the the red waters. The christian mythology that became attached to the place varies, some myths saying the well was caused by a drop of christ’s blood spilling from the grail, others that the spring erupted where Joseph of Arimathea buried one of the iron nails that was used to crucify Jesus in the ground. Today its a managed grounds used a garden for meditation, with the well itself, the lions headed spout and a wading pool.

The neighbouring white well is literally the other side of the road, and houses pools in a sacred temple in which daily rituals take place and visitors can bathe in pools of the water. These wells tend to be considered very much orientated to the female divine.

Being someone reliant on public transport, it does limit the places someone can go. If i cant get there by train or bus, it rather rules it out for me. So when my friend brought up that he was planing on doing a road trip to Glastonbury to stock up on supplies, I jumped at the chance. After a 4 hour drive there we arrived and grabbed lunch in town, before proceeding to tour every shop in the high-street. Its true what they say, in Glastonbury high-street you can find everything you need for rituals, magic and new age endeavours, but you cant find a place to get new socks.

The wells were a lovely time. When my group took a tour of the gardens around the well I was struck by how quiet it was. It was very well maintained as a meditative space, and all throughout there were spots where people were sitting in contemplation. I sat by the opening of the well myself to mediate, though honestly I was finding quieting my mind a bit hard that day.

After taking some of the waters from the fountain we moved on to the white spring, and went inside the temple. The white spring temple is awesome. It is this vast subterranean space inside the hills with large pools, lit only by candle light. Many shrines to various belief systems were set up in the corners. It felt special. It felt, well, Magical. I really regret not going in the waters. I’ll be sure to do that next time.

The tor was…. well its important to remember spiritual experiences aren’t the same thing as pleasant experiences. Ordeal can be a path to growth, and that’s what I kept having to remind myself as we went up. We decided, as it was so busy along the main path, we would go up the rear path, which is much less used. The reason its less used is because its much steeper. I have a fear of heights, and walking up became quite difficult when one side of the path was a sheer drop out onto the vast and open somerset countryside. This became a bit of a trial for me in the sense I was testing myself to push through it. Once we reached the top things calmed down. I took a moment to calm and centre myself, before offering up a libation of good whisky to the land and sitting with a friend to perform our respective rituals.

I won’t talk about what went on in the ritual, that’s a bit too personal, but what I will say is the after effects had me feeling mentally wrecked. I took a break while the other members of the party went to check out the abbey, and sat with a drink in a nearby pub to ground myself. It took me till the next day to fully feel right. Not all spiritual experiences are nice, calming, ecstatic ones. Many are better described by the original meaning of sublime; equal parts amazement and terror. For it all, I feel good for going through with it. I challenged myself, and came out on top. I am not an experienced pagan. I’m still learning, and I wonder if maybe with this I tried to bite off more than I could chew, but once you start something, you best see it through.

None of this would have been possible without the friends I shared that day with. It was spending the day with them that really made all this possible and such a rich and for-filling time.

One Reply to “Journal: Visiting Glastonbury”